Business optimism in Malaysia lowest in ASEAN at -36%

A recent research from the Grant Thornton International Business Report (IBR) reveals that business optimism in Malaysia fell to net -36% in Q4 2016, the lowest quarterly figure since 2010.

KUALA LUMPUR, 9 January 2017 – A recent research from the Grant Thornton International Business Report (IBR) reveals that business optimism in Malaysia fell to net -36% in Q4 2016, the lowest quarterly figure since 2010. This is a decrease of 24pp from -12% in Q3 2016 and this puts Malaysia’s business optimism level as the lowest in the ASEAN region at the end of Q4 2016.

The findings, from Grant Thornton’s most recent quarterly global survey of 2,600 businesses in 37 economies, reveal that business optimism among ASEAN economies has fallen 10pp in Q4 2016 to net 39%.

“Globally, the increase in optimism reflects a view among the business community that uncertainty over the outcome of major events like the EU referendum and the US presidential election is now behind them. Knowing the results will allow businesses to have a clearer steer on key issues such as taxes, jobs and trade policy.

“In Malaysia however, business optimism level suffered a huge decline due to our weak Ringgit performance and this links to our country’s economic uncertainty.

“Exchange-rate fluctuations topped the list as Malaysia’s biggest constraint to business expansion, with 76% of business executives highlighting this as a challenge. This is an increase of 34pp from 42% in Q3 2016 and is the highest in the ASEAN region.

“Meanwhile, business executives highlighted economic uncertainty as the second-biggest constraint to business growth and expansion in Malaysia, with 60% from 46% in Q3 2016 highlighting this challenge as hindering growth opportunities for business. This is also the highest in ASEAN region.

“Lack of skilled workers is the third-biggest challenge facing business expansion in Malaysia, with 36% from 24% in Q3 2016 of business executives concerned about this matter.”

Findings from Grant Thornton’s IBR do reveal a glimmer of hope as the outlook on key indicators in Malaysia is strong heading into 2017. According to the survey, despite low optimism outlook for the year ahead, businesses are planning an increase in employee salary, revenue, exports, selling prices, employment and also profit to gear up over the next 12 months. 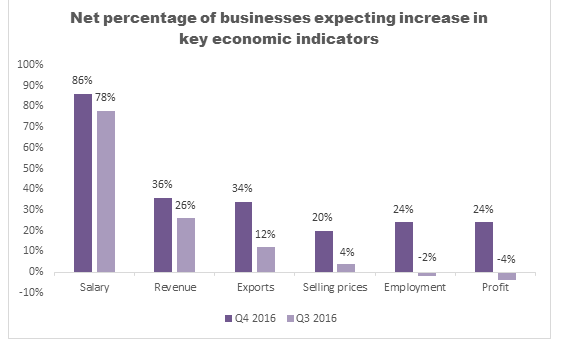 Malaysia also has the most proportion of businesses in the ASEAN region at 34% that are expecting an increase in exports for the year ahead. This is an increase of 22pp from Q3 2016.

The findings also reveal that businesses in Malaysia are also expecting revenue to increase for the year ahead. The proportion of businesses expecting an increase in revenue has gone up to 36% from 26% in Q3 2016.

Besides that, businesses are planning to increase hiring over the next 12 months. 24% of businesses have expressed that they will be hiring as compared to -2% of businesses in Q3 2016.

“There is a striking split in the direction of travel between business leaders in emerging and developed Asia Pacific countries. Part of the reason for this could be the likely scrapping of the Trans-Pacific Partnership (TPP), out of which developed economies – like those of Australia and New Zealand – stood to gain the most. However, China is looking to implement its own regional economic partnership, which could fill some of that gap. The high levels of optimism in emerging economies reflect what can happen when closer economic ties are in place, with the ASEAN Economic Community agreed in 2015.

“There will be challenges in 2017, including the impact of further rate rises from the US Federal Reserve. But these shouldn’t mean that growth plans across Asia Pacific should be abandoned. They may be focused on investing for greater efficiency, hiring new skilled workers, or researching new markets and services. Dynamic firms with the ability to think long-term and pay attention to their operations will be the big winners.”

In concluding, Dato’ Jasani said that the relevant Malaysian Ministries like for Finance and Trade as well as authorities like MIDA, Inland Revenue, and Customs should be dynamic in helping Malaysian businesses grow and prosper. This will create much needed employment and additional tax revenue.

Eliminating red flag and promoting efficiency should be the aim in order to have a holistic environment that would stimulate business growth.

In this context therefore no new taxes, foreign workers’ levies or new form filling requirements should be introduced for the next one year. As a nation, we must be pro-business and pro-growth.