IRB should consider Tax Amnesty instead of much Higher Penalties

Will Achieve Bigger and Broader Tax Base

Kuala Lumpur, 26 April 2017 - The recent announcement by the Director General (DG) of Inland Revenue Board (IRB), Datuk Sabin Samitah, to enforce harsher penalties for income tax dodgers signals the intention of the IRB on going after chronic or hardcore tax defaulters.

Many would see this as being overzealous in the current tough Malaysian economic situation. The announcement made by the DG is actually within the limits set under the Income Tax Act, 1967 (“the Act”).  Section 113(2) of the Act inter-alia allows the DG to impose a penalty equal to the amount of tax undercharged in consequence of submitting an incorrect return or providing wrong information.

Nonetheless, the DG had in the past exercised discretionary powers under Section 124(3) of the Act to consider a lower penalty of 45% to be imposed on the first offence. This discretion has been embodied in the Tax Audit Framework issued by the IRB which was effective from 1 January 2007 and its subsequent revisions. The Framework states that the DG will consider a lower penalty of 45% to be imposed for the first offence instead of 100%.  This discretion by the IRB shows that they have been cognisant to the plight of taxpayers in imposing a lower rate of penalty at 45% of the tax undercharged. However, this according to the DG is set to change effective from 1 January 2018.

Dato’ Jasani opined that, “Many businesses would grumble that the withdrawal would also apply to first time offenders. This would not augur well with taxpayers who are seeing a dip in their revenue in recent years and the increased cost of compliance would eventually take a toll on investors.  It also has the danger of placing taxpayers with technical disputes in grey areas of law on the same level as errant hardcore tax defaulters.”

“As the Government is pushing to increase its revenue, it could perhaps emulate from the success of our neighbour, the Indonesian government, in implementing a Tax Amnesty initiative for taxpayers,” highlighted Dato’ Jasani. The Tax Amnesty initiative by the Indonesian government was announced by their Finance Minister, Sri Mulyani Indrawati early last year. The Tax Amnesty lasted for 9 months beginning from 01 July 2016 to 31 March 2017 and was a whopping success in terms of the money collected from tax dodgers.

As reported in the respected Economist magazine in its 1st April 2017 issue, more than 800,000 evaders declared US$350 billion in assets. The Government collected substantial additional tax revenue.

Pertinently though the main benefit for Indonesia was substantially increasing the number of tax payers and the tax base for the future.

In concluding Dato’ Jasani said, “Our IRB should also ponder similar policy and have Tax Amnesty for a period of 6 months with a 15% tax rate for previously undeclared income. This rate compares favourably with the current Corporate Tax rate of 25%. IRB will then not only be increasing the tax revenue for this year but also for the long term increase in the tax base and revenue.” 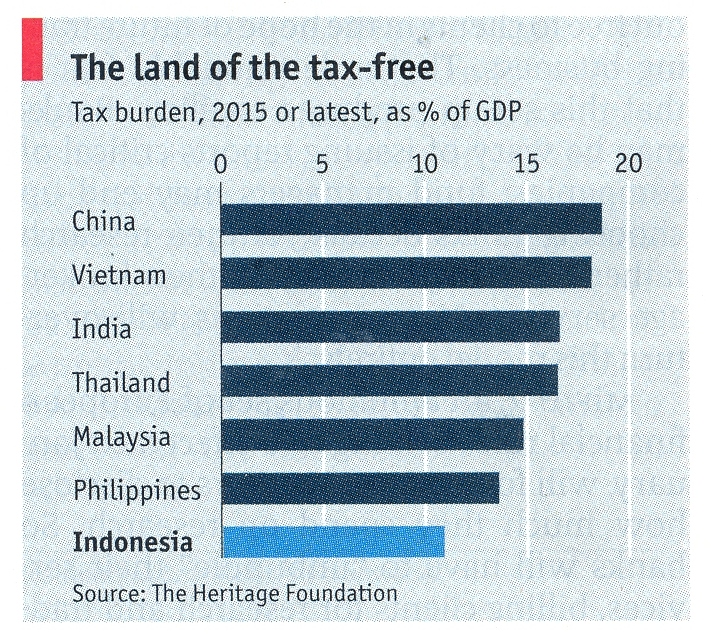 As the chart above from The Economist (1st April 2017) shows for Malaysia there is a need to increase our tax base for more equitable and sustainable tax revenue collection.