Business owners in Malaysia have expressed their support for the introduction of quotas for the number of women on executive boards of large listed companies (62%). This makes Malaysia the 3rd highest in ASEAN in support of the quota.

Kuala Lumpur, 7 March 2014: New research from the Grant Thornton International Business Report (IBR) reveals that support for the introduction of quotas to get more women on boards is growing. Globally, close to one in two business leaders (45%) would like to see quotas for the numbers of women on the boards of large listed companies.

Business owners in Malaysia have expressed their support for the introduction of quotas for the number of women on executive boards of large listed companies (62%). This makes Malaysia the 3rd highest in ASEAN in support of the quota.

Support has grown sharply in the EU (from 33% to 41%) where the imposition of quotas are most likely, but also in the BRIC economies (41% to 72%) while support remains high in Latin America (68%) and Asia Pacific (57%). Across the G7, however, only 33% of business leaders are in support of quotas.

“Women appear to show greater openness to coaching, place greater emphasis on more modern management techniques and are also more willing to delegate. We are definitely seeing a difference of approach that highlights the value to business of having gender diversity in senior roles,” she added.

The concern is that recent improvements in the access of women to education, especially in emerging markets, have not translated into higher proportions of women reaching the top of the corporate ladder. While women are more likely to achieve these senior roles in emerging markets, there has been a worrying lack of movement globally over the past decade. 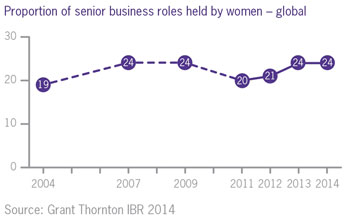 Globally, the proportion of senior roles filled by women in 2014 is 24%. This is exactly the same proportion as 2013, 2009 and 2007, and only 5% higher than the 19% recorded ten years ago in 20041. The number of senior business roles held by women in Malaysia has not changed much since last year. 25% of businesses in Malaysia have women in senior management as compared to 26% last year.

Regionally, there has been very little significant change over the past decade with Eastern Europe (37%), southeast Asia (35%) and China (38%) leading the way. Japan (9%), India and the United Arab Emirates (both 14%) continue to prop up the table.

“Businesses should implement measures which could support and make a real difference for working mothers. The IBR has revealed that business owners in Malaysia support and offer continuing professional development/education to working mothers the most (68%),” said Seah Siew Yun.

“Besides that, giving paid maternity leave that is beyond what is legally required is the second highest form of support by business owners in Malaysia (63%) and they also encourage mentoring/coaching working mothers (59%),” she continued. These are some measures that can be taken to retain their most talented women in the workforce.

“Businesses should consider hiring more female graduates. You would expect a fair proportion of a business's future leaders to come from its pool of graduates, so getting more women starting at that level will increase the odds of them making it to the top. It’s better for businesses too; a wider breadth of candidates means more chances of hiring star performers,” she added.

A full report, ‘Women in senior management: from classroom to boardroom’, will be available on from Friday 7 March via www.internationalbusinessreport.com.