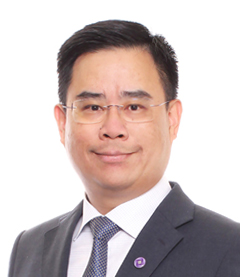 Alan Chung is the Head of Indirect Tax and Transfer Pricing practices of Grant Thornton Malaysia.  He was previously attached to the “Big Four” accounting firms and had headed the Secretariat of the Chartered Tax Institute of Malaysia’s (CTIM) and served as the Head of Tax of a public-listed company.  Alan has more than 20 years of experience in tax compliance, tax advisory and indirect taxation.  Above all these, he played a role in the implementation of the self-assessment system in Malaysia as a secondee to the Inland Revenue Board of Malaysia.

Alan is a Fellow of CTIM and a Fellow of CPA of Australia. He is currently a Council Member of CTIM, a member of CTIM’s Technical Committee–Indirect Taxation as well as a member of CPA Australia’s Malaysian Division Council’s Tax Committee. Previously, he was also a Divisional Councillor for CPA Australia’s Malaysian Divisional Council. With a wealth of experience dealing with various government agencies and departments, Alan actively contributes in dialogues with various Government agencies to resolve a myriad of both direct and indirect tax issues.

Alan regularly speaks and moderates in seminars and conferences including the Sin Chew Business Excellence Awards.  He is an experienced trainer focused on disseminating knowledge and know-how to many corporations which include government-linked corporations and a statutory fund for employees.  Besides training, Alan has also co-authored a book on GST published by Wolters Kluwers Malaysia, entitled “Malaysian GST: 100 Questions and Answers” (ISBN: 9789670853154).

Alan is a Fellow of the Chartered Tax Institute of Malaysia and CPA of Australia (FCPA), and a member of the Malaysian Institute of Accountants (Chartered Accountant).  He is an approved tax agent under the Income Tax Act 1967 and the repealed Goods and Services Tax Act 2014.