Dato’ NK Jasani, Managing Partner of SJ Grant Thornton said, “The IBR has also revealed that +52% of Malaysian businesses are expecting higher revenue for the year ahead.”

Kuala Lumpur, 2 January 2013: Hopes for a strong start to economic recovery in 2013 look to be diminishing globally especially in the United States and Europe. The latest data from the Grant Thornton International Business Report (IBR), a survey of 3,200 business leaders in 44 economies reveals that global business optimism stands at just net 4% heading into the New Year. Optimism level is at 0% this time last year.

However, the forecast and scene is entirely different for Asia and particularly for the ASEAN nations.

Malaysian business owners have expressed that they are gaining confidence on the country’s economy, pushing our position back on the positive +12% as compared to -4% this time last year.

Dato’ NK Jasani, Managing Partner of SJ Grant Thornton said, “The IBR has also revealed that +52% of Malaysian businesses are expecting higher revenue for the year ahead.”

“+42% of businesses are expecting to invest in plant and machinery and +35% are expecting profitability for the year ahead,” he continued.

Business owners in our neighbouring countries are also optimistic on the economy next year. The Philippines reigns as the most optimistic at +72% in the region followed by Singapore at +26% and Thailand at +19%. Vietnam has dropped from +34% (last year) to -10%.

The fall in global business optimism

The fall in global business optimism has been largely driven by a huge fall in the world’s largest economy, the United States. The report suggests that economic uncertainty caused by concerns over the United States ‘fiscal cliff’ and ongoing fears over the long-term viability of eurozone is dampening growth prospects. 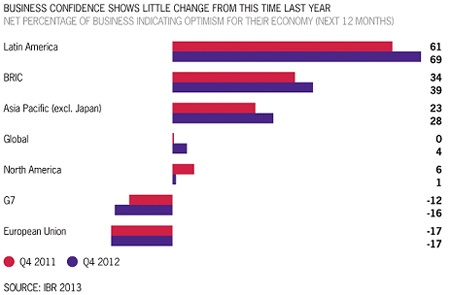 Regionally, the IBR reveals a more mixed picture. Business optimism in the emerging markets of Latin America remained relatively stable over the last year, and actually increased to 69% in Q4, up from 61% this time last year. The BRIC economies (34% to 39%) also remained consistently optimistic, while Asia Pacific (excl. Japan) has seen a rise from 23% to 28% over the same period.

By comparison, optimism in North America swung from 6% in Q4 2011 to 52% in Q2 2012, before falling back to just 1% in Q4 2012. The G7 economies have seen similar swings, while European businesses have reported a slow decline in business optimism.

Dato NK Jasani added: “The upswing in mature economy business optimism we saw in the first half of 2012 followed pronouncements by the ECB and the Federal Reserve on the level of support they were prepared to provide their respective economies. However, this confidence has dissipated over the second half of the year. By contrast, emerging economies have remained far less volatile. It’s a fascinating trend which drives home where the major problems in the global economy lie at present.

“Economic uncertainty understandably elicits a ‘wait and see’ policy from businesses, but we would urge owners not to lose sight of their long-term growth objectives. Opportunities exist for those dynamic businesses which are prepared to balance reason with instinct in their decision making.

Those that lock in their best people be pro-active in marketing and back-up planning and invest to be first out of the gate in a recovery are likely to find themselves ahead of the competition.” 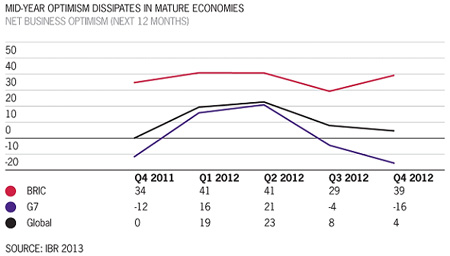